From Retiree to Data Scientist at NASA

For most of us, unfinished business at college means a few remaining credits standing in the way of a diploma – not pursuing an additional advanced degree. 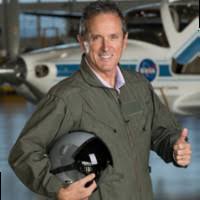 But for Doug Trent, earning a Master of Science in Analytics from Georgia Tech is about answering a call he heard early in life, one that he’s never been able to fully address until recently.

As long as he could remember, Trent was an engineer at heart. “I was always getting into the chocolate, and my mom finally put a lock on the kitchen cabinet door. So, I found a screwdriver and took the door off its hinges. That was at age one,” Trent chuckled.

“My dad was a Tech grad and I was singing ‘The Ramblin’ Wreck’ by kindergarten,” he laughed, “so I’d say a Tech education was pretty much in the cards.” When the time came, he enrolled as an undergraduate.

But while electrical engineering was his official course of study, Trent harbored a deep interest in computer design and programming. At the time, the two disciplines did not overlap, and Trent was taking so many computer science classes that his advisor warned him he was going to fall short of the engineering graduation requirements. Trent’s solution was to complete his bachelor’s degree and then continue straight to the Master of Science in Computer Science program.

“It seems hard to believe now, but, back then, an engineer who could program was a bit of an oddity,” Trent said. The uniqueness of having both degrees “turned out to be a one-two knockout punch with prospective employers.”

He went to work for IBM where he was promoted to a management role within three years. “Being a manager led to doing some big things, such as managing IBM’s Personal Computer lines worldwide, and creating the world’s first smart phone,” he said. The change from engineering was a career advancement and while Trent enjoyed the opportunities that came with it, he missed being hands-on with the technical.

When he retired from IBM after 26 years, Trent moved to Brazil, where he’d met his wife back in 2001. “Just like the song,” he remembered fondly. “She was literally the girl from Ipanema!” In 2012, they moved back to the U.S. and Trent found himself wanting to re-enter the workforce. “I had been tracking artificial intelligence and machine learning, and I saw how it was becoming the next revolution in business productivity. I wanted to get back into that, but I wasn’t quite sure how.” When he heard about Georgia Tech’s OMS Analytics, he had his answer. “I’d always wanted to be technical, but it didn’t work out that way. This was my chance to circle back.”

He saw that the degree merged computer engineering, industrial systems engineering, and management, and the multi-disciplinary approach spoke to him. “Just as I combined electrical engineering with computer science,” he noted, “I was now seeing how data science and business skills really go hand in hand.” The fact that he could take classes online “from anywhere” sealed the deal. “It was just too good to pass up!” He enthusiastically joined the program’s first cohort of students.

Now as a graduate, Trent is struck by the forward-looking nature of the curriculum. When he started, “what I was studying, I didn’t see so much on the job boards. But now, it’s exactly what companies are looking for. I didn’t know it at the time, but everything I took at Tech really was pointing a couple of years out, to intersect with where industry is now. To use the Wayne Gretzky quote, I was ‘skating to where the puck was going to be.’”

So much so that, eight months prior to completing the program, he scored a job with NASA, a direct result of the practicum. “I thank Georgia Tech for putting the practicum in the curriculum,” he said. “It really pushed me to polish my resume and submit to about 35 job internship openings.”

One of those was the NASA position. “Just by coincidence, I had brought the family up from Florida to Virginia Beach on vacation,” he recalled. “And the day we landed, I got a call from Hampton [Virginia], where NASA Langley is located, with their interest in talking to me.” Two days later, he’d landed the internship, and in the next two weeks, “we packed up, rented out our home, and moved.”

The practicum ran for a semester during which time Trent applied for a full-time position. He credits Georgia Tech’s OMS Analytics not just for opening the door, but for preparing him with the skills to shine once there. “I used what I had learned to work hard for them,” he said, “and I guess they liked what they saw.” Trent received an offer and started the next month, while finishing his last class. He now holds the position of program manager of digital transformation at NASA Langley Research Center where he leads a team of data scientists in the Office of the CIO. He is charged with accelerating the adoption of AI technologies to support the center’s digital transformation strategy.

As if the fortuitous timing of the vacation in Virginia weren’t enough to indicate this was a match meant to be, Trent had written about NASA in his application essay to the program. “It was almost eerily prescient,” he said, laughing. “Who could have guessed that two years later, I would be working for them?”

And working in a technical capacity, which had always been his passion. By answering a call from early in life, Trent charted a new path and landed a late-career dream job.

6 Tips for Work-Life Balance as an Adult Learner

Sep 08, 2022 | GTPE Communications
“With a full-time career, three kids, and working on a master’s degree, my time is spread thin. I want to ensure that each gets the proper amount of my time and attention,“ said master’s candidate,... Read Article >

From Family Legacy to Personal Passion

Sep 06, 2022 | GTPE Communications
If there were ever an example of someone living fully in the present while keeping a trained eye on the future, that person would be Ty Hatcherson. As he nears completion of the Georgia Tech Profe... Read Article >