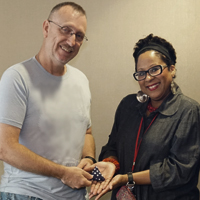 At a recent OSHA Electrical Standards course held at the Georgia Tech Professional Education (GTPE) Global Learning Center, Master Sergeant James E. Sites of the Georgia Army National Guard, who attended the course, offered a poignant thank you to a GTPE staff member and the course instructor. As a token of his appreciation for the excellent service and instruction he received at GTPE, Sites gave Monique Waddell, portfolio manager, and Thomas Dean, instructor, folded United States flags, which he had brought back with him from his deployment in Afghanistan just over a year ago. Tasked with safety at Base Support Group (BSG) at Camp Phoenix in Afghanistan, he has taken many GTPE professional development classes and credits GTPE’s OSHA courses for his success in this role and in his safety career overall.

Sites, whose father was a WWII veteran, has served in Iraq and in Afghanistan and still has the next-to-last flag that was flown over Camp Phoenix before the camp was closed for good. For him, the U.S. flag has always held a special meaning. On his deployment to Afghanistan, he took 50 folded United States flags with him, intending to keep them while deployed, carry several at a time while on duty, and then to give them as gifts to special people when he returned home. “I’m very particular about the people I give the flags to – they have to mean a lot to me. I’ve been back for a year and I still have seven flags left. I don’t give them out lightly,“ he said.

When he returned to the U.S. after his last deployment, he chose to give the very first flag to a Vietnam veteran. Considering his love for his country and his own family history of service to it, this choice seems especially fitting.