From Student to Instructor: A Homecoming Story

When Chris Carter graduated from Georgia Tech in 2007, he didn’t think he’d be back. Fourteen years later, his leadership and dedication to workforce education at Georgia Tech Professional Education (GTPE) has not only proved to be one of the most rewarding experiences of his career but also benefitted countless learners at Georgia Tech who have come after him.

Carter grew up in the Smoky Mountains area in Knoxville, Tennessee. When he began to think about college, Georgia Tech was at the top of his list. He knew he was interested in industrial and systems engineering, and Georgia Tech was the number one school at the time. “Georgia Tech had a reputation of making the best engineers in the southeast,” Carter said.

His parents supported his goal and encouraged him to aim for Tech. “I remember my dad bought me a Georgia Tech hat my senior year of high school,” Carter recollected, “and I used to wear that hat every day.”

Carter achieved his goal and more, earning a four-year endowed scholarship to attend Georgia Tech. Many people told him how difficult the experience would be, but their warnings only encouraged Carter more. He was excited about the challenge. “I knew these classes would be hard, but you have to put the work in,” he said. “That’s what inspired me to go to Georgia Tech. I wanted to develop and test my work ethic.” His work ethic passed the test, and Carter emerged successfully with a bachelor’s degree in Industrial and Systems Engineering in 2007.

Applying Skills in the Workplace

After graduation, Carter began working for Toyota North America in research and development for their engineering processes. About five years later, he transitioned into a project management role. Although he was practicing project management professionally at Toyota, Carter realized he didn’t know much about the skill. So, he decided to return to Georgia Tech to earn his project management certification. “That has been one of the best decisions I have made for my personal career,” Carter reflected.

“I got my project management certification, sat for the PMP, passed it the first time, and my career took off. The skills and the practical applications I learned in class were immediately applied at my work.”

Carter’s new knowledge boosted his career at Toyota. He became known as the local subject matter expert in project and program management, and soon enough, he was requested to join senior management. Now, he’s the executive general manager.

In 2014, Carter was approached to teach project management at Georgia Tech in the same way that he had been doing at Toyota. Carter had never considered formal teaching before, but he was excited to take the opportunity to share his knowledge and expertise at his alma mater.

“I’m a big believer in lifetime learning. I think what motivated me to decide to come back to Georgia Tech is that I love the space. I think Georgia Tech is growing in phenomenal ways and I very much believe in gold and white.”

So, Carter came “home” to Georgia Tech to pass down the wisdom and expertise that he had gained through the years. And after seven years of teaching project management, his enthusiasm for workforce education has not waned. “Teaching at Georgia Tech is like a dream come true for me,” he remarked. Fueling his enthusiasm is a strong belief in Georgia Tech and its approach to professional learning. “I wouldn’t consider any other institution to go to for my personal lifetime learning,” he explained. “Georgia Tech is a place that promotes learning not only for individuals but learning for communities. It encourages learners to ask, how can we make a difference in our communities?” 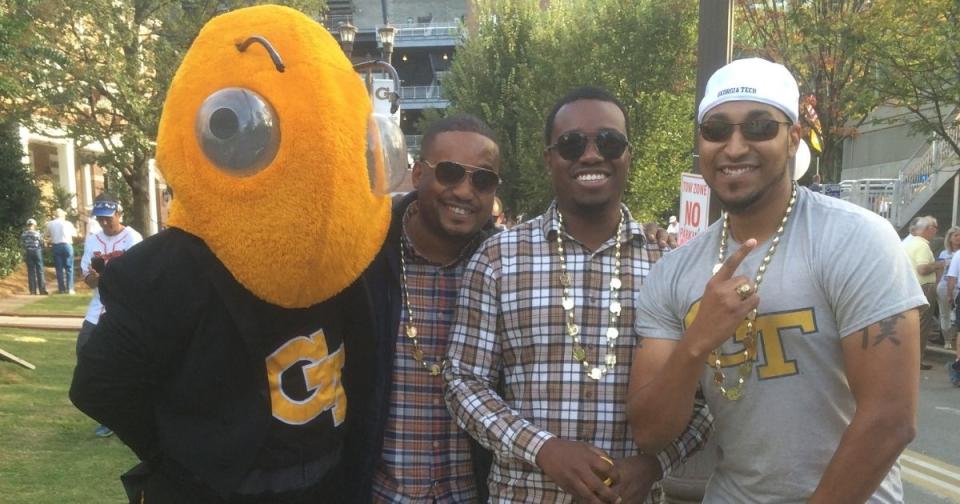 Chris Carter (right) came "home" to Georgia Tech for homecoming in 2017. He's pictured with his fraternity brothers and Buzz at a football game.

Carter believes in passing the torch of education down to the younger generation to build up the community. “I’m a big believer that education is the foundation of building community, socially and economically,” he said. “That’s what Georgia Tech does.” For Carter, the greatest reward of teaching is seeing how his learners grow and succeed.

“As a teacher, I’m not just trying to push knowledge on people, but I’m seeing them succeed. “Their success is my success. Their success validates me as a teacher, and that’s what drives me.”

In turn, that motivates him to continue developing the project management program to deliver a high-quality educational experience. Ever since beginning as an instructor, Carter’s initiative and passion for education have continually improved the program and his learners’ experiences. So, in 2019, when Jim Consuegra retired from his role as the academic program director for the project management program at GTPE, Carter was the clear successor.

Under Carter’s leadership, the program continues to grow and evolve to meet today’s workplace needs and provide learners with the best possible education. In fact, the program has just entered a formal partnership with the Project Management Institute (PMI) in Atlanta, which is the third largest in the world, boasting over 5,000 project manager members.

The partnership will not only expand the reach of the project management program but will also offer an abundance of networking and learning opportunities for learners in the program, reflecting the community investment that Carter believes in. “We are partnering with the industry leaders in our communities to make an impact,” he said, “and that is my vision for our project management department at Georgia Tech. We’re going to continue to develop partnerships like that going forward.”

Looking Back and Ahead

When Carter considers the impact of his Georgia Tech education, he notes the importance of applied learning. “Georgia Tech taught me the value of hands-on experience and practical skill sets and takeaways,” he said. Now, as an instructor, he has made sure to implement this principle into Georgia Tech programs. “It’s not good enough to have book knowledge in your head. That’s not the Georgia Tech way,” he explained.

“The Georgia Tech way is to make a practical application that will benefit the end user, the customer, or the market.”

Looking back on his educational and career journey, Carter notes two practical ways in which Georgia Tech has helped him grow. One, by refining his work ethic and approach; and two, by boosting his career trajectory through professional education. “I credit Georgia Tech for a lot of success that I’ve had in life,” he remarked, referring both to his career at Toyota and his teaching platform at Tech.

As both a Georgia Tech alumnus and employee, Carter demonstrates what means to be a Ramblin’ Wreck: a lifelong learner, motivated never to stop growing. “I am very grateful for the Georgia Tech experience,” Carter reflected, “and I want to continue to promote the brand and ensure that the quality of education at Georgia Tech continues.” 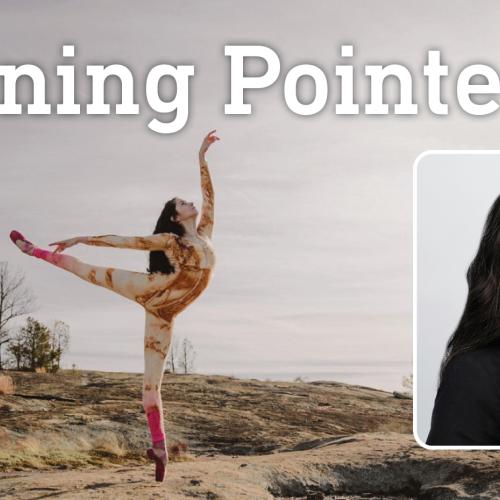 Jan 13, 2023 | GTPE Communications
Some careers follow a natural course. When a retired athlete becomes a sports commentator, no one is surprised. Ditto the star chef who opens a restaurant. But then there are professional paths th… Read Article > 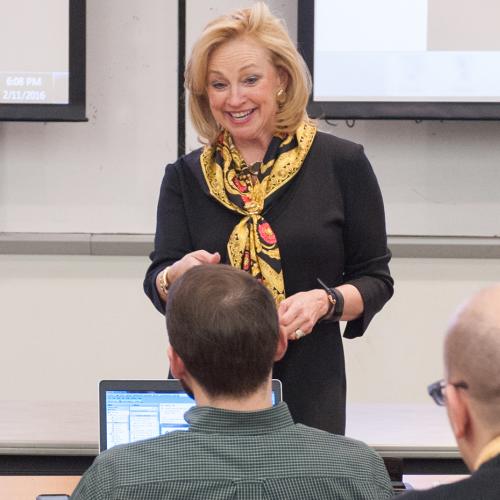 Learning Beyond the Classroom

Mar 29, 2019 | GTPE Communications
“Hi, it’s a fantastic Friday! This is Debbie!” It’s not your typical phone greeting, and when someone answers a call with that sort of enthusiasm, you know you’re talking to an exceptionally positive… Read Article >